A downloadable KwK for Windows, macOS, Linux, and Android

Summer of Heisei period 9 (1997), you play as a young boy who just moved to a small village near Osaka. You will meet three girls in this new school. One of them keeps a really deep secret… What secret? Well, if you can decode the title, you’ll guess it…

"There she he's" (can also be called "Kare wa kanojo" or "彼は彼女") is an independant visual novel made in Ren'Py.
You can also find the game in Google Play for Android devices.

NOTE: The game is free! You're encouraged to make a donation but you can get it for free by clicking "No thanks, take me to the download"...

The game is really good, a 18+ isnt needed for it to be good, perhaps as a paid dlc for those who want it bad enough,  but the story itself is good on its own

I got the ratings from the android version. Google Play has a tool that helps you decide what are the ratings according to the contents and I followed the advices. In my opinion +18 is too big but well... :p

… Guess I won't be able to play this novel anytime soon…

Any chance of an Android version? Would love to play it

.... There is an android version available.

is there a way i can download the original version where its only the 2 characters and MC? i much preferred the old art style, hell id be willing to pay for it if i had to.

I play this game when the art was still 3D and it only 2 characters with the MC too or you can say when the game first came out and the story was so good i almost cried . Good job for the creators can't wait for more of your project and i gonna download this new version again so i can know this new glasses girl :D

I played this when it first came out, I just now downloaded it again and it was still fun, it crashed a couple of times on me but it's my favorite one I've played so far, I'd love a 2 or at least another story with another transgender like charachter I loved her so much!

I tried downloading android verison but it crashed. Phone for reference if needed - Archos 50f Helium.

When trying to open splash screen appears and then game closes. If I remember correcly.  That's probably true about phone. However other games in Renpy runned to this phone.

So I shouldn't be playing games on families laptop then I'll play when I got own pc or better phone.

Awe, its so sweet, but also so sad. I love it. only thing is that I wish it Was possible to choose another girl without breaking Sakuras heart :,(

Don't be afraid. Sakura is more strong than she looks. As long as you stay friend with her, i'm sure she can overcome it. :)

I really loved this and highly recommend it to anyone who loves visual novels. The story was amazing and Sukura's route made me cry towards the end. I rate this 5 stars. I will recommend this to friends, and I may do a few videos on YouTube. Please make a sequel with the same characters, but older. I would love to see an older Sakura, Rika, and Nanami with a similar but different story and maybe a bit longer and more choices. I love your work, and will definitely look for your future products. (Btw, I posted this same comment on GameJolt)

Well then I just sent a reply on GJ. ;) Thanks for the nice comment btw

Np. I really loved the game

Quick note - under the Itch client, the game fails to launch (can't find executable). The exe is there, through further investigation (AppData/Roaming/itch/apps/Kare wa Kanojo) but the itch client itself can't launch it.

the game isn't meant to be run with the itch client yet for the simple reason that the exe is an installation program. I might make a version for itch client someday if it's highly requested. But for now, just get the setup exe and install it normally. ;)

Loved the game played and finished Sakura's route. I remember playing the Android version and I am happy to finally play the PC version. I really hope you could make a second one of this maybe when their older or something like that. Also I won't mind playing another game like this. Good work on this game.

We're actually thinking about a sequel. ^^

I will be looking forward to it. Love the game.

I have been converting my Amazon Fire HD10 in to a real Android tablet - installing the launcher hijacker, google playstore, Nova.. and in my testing things out I ran across Kare wa Kanojo - hilarious name, confuses the translaters but clever.  It _is_ a little bit of foreshadowing, eh?  Anyway - something in all the comments and your approach of "pay-what-you-will", and the scenario for the game itself has me certain to read it.  I grabbed the apk and also downloading windows ver. - the images look worthy of the higher-res to me.   I have one question, and I almost hesitate because I don't want to get anyone "up in arms" about the issue..  you seem cool and since I got the info on VNDB I doubt I will offend you.  VNDB says there is an 18+ version of the Eng+Win release.  I personally am not a prude, nor a sicko.. I enjoy anime/manga girls, there's an innate beauty and often sex-appeal to the style, and we all know it.  Anyway - from VNDB I tried to track down a patch or a release of that version, as I will always prefer an 18+ for such a story (it is honestly closer to IRL as far as I'm concerned).  From some comments it sounds like the content was simply removed, but - I like the way VNDB presents it, heh... an option/version.  I know many people kind of dis'd the art - but I like it.  I like all of the characters.  I was on deviantart and I happened upon an artist's impression of this game.  She wrapped up her writing with this:  "... but this fetish fiend found something meaningful and beautiful in Kare wa Kanojo.".  I didn't realize that it was not just a straightforward trap, but rather - a heartrending story about a _girl_ -- with a very rare condition, wherein ... the "special place" does not develop the way it normally would, and sometimes is even very similar to the male "special place".  Now - this person may have been hypothesizing if the ending left out any detail... but implied that she was not simply a "dude in girl's clothes".  Well,  I'll find out.  I kind of hope that there is a patch or an original copy of that 18+ because if the story's good (many call it brilliant), it will support the added realism of a little H.  I'm intrigued anyway, and tra
Apologies for the runaway verboseness.
Cheers and really looking forward - lot of very positive press, Max!

For any other questions, i invite you to check the official FAQ first on the game's blog. (where you might find some other surprises as well!)

I really enjoyed the game! I did a little playthrough of the game here! (Nanami's Route) I did run into a lot of grammar and spelling issues in the English text of the game. But otherwise, I had a really good time! I think I might do another playthrough and try and get with Rika, just to learn more about her. I'm also happy about the choice made with Sakura. I don't want to get too into her character to avoid spoilers but I apperciate the way the developer executed that part of the narrative. I also ran into a crash at the very end when trying to look through the bonus content. Hopefully that will be fixed in a future patch along with the english grammar! Keep up the great work dev!

Awesome, thank you ^^ I love watching letsplays of my games :)

And about the crash, it has been corrected very recently. click on the button "update available" when it will appear in game.

And for the grammar, i'm still looking for volunteers to correct it. ;p

I would love to help with the english translation! Feel free to message me if you'd like the help!

Would be a pleasure! ^^ Send me a mail here and i'll send you the details 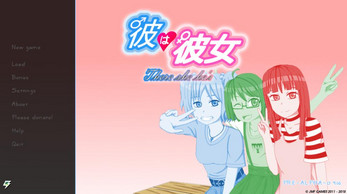 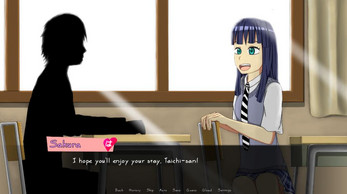 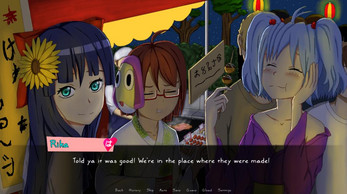 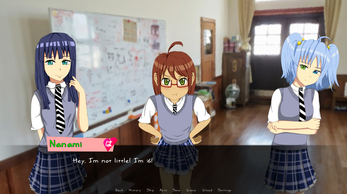